Wednesday, 14 October 2015 / Published in Cool Stuff, Spark in the Field 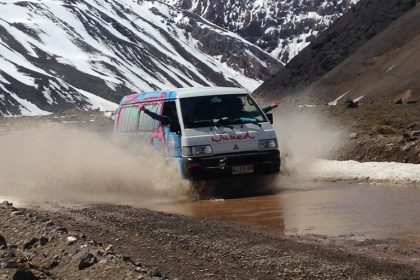 Dedicated Spark R&D product tester and splitboarder, Frankie Devlin, just returned from a couple weeks in South America adventuring around and getting his splitboard on. He was nice enough to answer some questions for us about his trip.

What were the exact dates of your trip?
We flew out of Vancouver on Sept 18th and returned on October 5th. It was really cheap to fly out of Vancouver because of the exchange rates right now.

Who did you go with?
My good friend Eben Sargent has been going to ski in South America since 2009. He has an awesome habit of working really hard for a few months and then traveling to someplace rad on the super-cheap program. I knew he would be a great person to travel with and we would be getting into some mountain adventures for sure. He asked me to go and we both thought that Tad (Elliot) would be a great addition. Tad just got done with his first season of fishing in AK and was looking for some adventure. He’s a super solid snowboarder and just an all around great guy to hang out with. 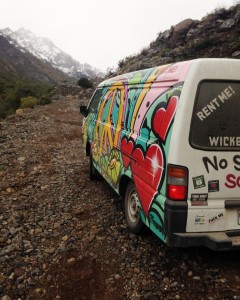 Converted and ready for splitlife

Where were you based out of?
We were based out of Amanda (our Rental van). She was a pretty basic 2WD Mitsubishi L300 that was converted to a dirtbag camper by Wicked vans. Getting the van was cheaper than renting a car and paying for hostels. I have friends that did a trip like this with no car, but we were on a pretty tight schedule and we wanted to maximize our time for shredding. A 4×4 would have been nice for some of the gnarlier access roads, but with tire chains and some east coast redneck skills, we were able to get pretty much everywhere we needed to go.
As far as location, we spent a bunch of time in the Maipo valley. Eben’s Chilean climbing guide friend, Seba, is in the process of building a stone refugio up in the mountains there. It is right next to a creek at the base of four massive couloirs. Every time we went into town, we skinned back into the refugio with a load of firewood and some whiskey or beer. When we got there, we were splitting firewood with the adze on Eben’s ice tool, so we bought him a Brazilian camp hatchet as a thank you gift. We are super grateful to be able to hang out at the refugio. Thanks Seba!

Was this your first trip splitboarding in South America? If not, where else have you been?
This was my first trip to South America. I have never even been to Mexico. It was really awesome to go to a completely new place and go snowboarding. There is so much terrain there, it’s pretty mind blowing. We spent 2 weeks touring around and we never went more than a few miles from the van. If you had the time and motivation, you could put together some really incredible adventures.

What are you thinking about when you plan a trip abroad to spend time in the backcountry?
When you go to ride backcountry terrain in South America, you really need to be able to count on your gear. There is a small, but growing splitboarding scene there and gear is really expensive and hard to find. If you are out in the backcountry for a few days and you break something, that’s it, you’re screwed. You can’t just run to the local shop and grab some parts. You have to make do with what you have. Bring extra screws and straps and other things that you could easily lose or break. I really believe that Spark Bindings are the best for something like this since they are relatively simple and really reliable compared to the other options. We beat on our gear pretty hard every day and didn’t have any major setbacks. 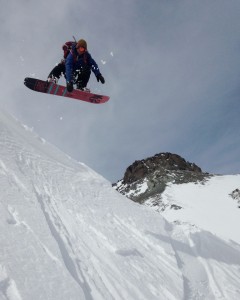 You’re not going to an all inclusive resort, what factors do you take into consideration?
If you’re going to do a trip in this style, you need to be OK with some level of dirt-baggery. There were three of us living in a tiny van and skinning many thousands of feet each day. We took two showers in 18 days. The van definitely got a little bit funky. You also need to be ok with a little bit of variety and at the same time, a lack of variety. Pesto flavored Ramen for breakfast? Sure! Avocado and cheese sandwiches for lunch every day for two weeks? Sure!
The other big factor is access. Most of the mountain roads are pretty sketchy. The nice ones are nice because there is a mine or some other project going on. There will be huge dump trucks, loaders, horses, tanker trucks full of sulfuric acid…. pretty much just expect the unexpected. Being able to speak a little bit of Spanish helps with talking to the guys in the guard shacks and ordering empanadas. You just have to be really flexible and go with the flow. We drove up two separate valleys only to be shut down by mining operations miles from the snow. When we asked if we could drive up their road to go snowboarding on the beautiful mountains behind them, they laughed and told us to go to the ski area.

What is your gear set up for a trip like this?
We weren’t really sure if we were going to be doing more high alpine mountaineering stuff or pow riding, so we ended up bringing everything. We had normal touring gear, glacier gear, technical ice tools, boot crampons, splitboard crampons, a tent, stove and all that good stuff. I brought some extra boot liners which was awesome. I was able to change out for dry liners every couple days. Tad was definitely jealous of that one. We ended up riding a lot more pow than we expected so we didn’t use the glacier gear, but it was nice to have the ice tools for a couple lines. There’s lots of good food down there, but you aren’t going to find your favorite energy bars or anything like that. I brought a couple boxes of bars and some other favorite treats from back home. 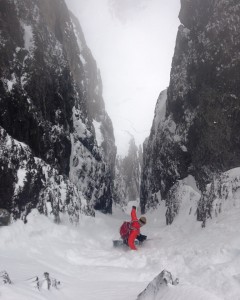 Frankie down a steep and narrow couloir

What did you not pack that you realized you needed when you were down there?
SOCKS. Seriously. Three pairs of snowboard socks is not adequate for an 18 day trip. I don’t know what I was thinking, but I would definitely recommend bringing an extra duffle bag full of snowboard socks. I also wish I had brought one of those two pound bags of sour patch kids. We couldn’t find sour patch kids anywhere…

Take me through your favorite day on the trip.
The best day of the trip for me was riding a really long and skinny couloir above Embalse El Negro. From the van, the line looked improbable at best, but the scale of the Andes is deceiving. We had to wake up before dawn to traverse for a couple miles along the edge of the lake. It was almost 5500′ from the lake to the top of the line and the snow varied from spring corn to knee deep blower pow with everything in-between. We were super lucky to find gorgeous stable pow in the upper couloir. This line was definitely conditions-dependent and we got fully hooked up.

Any famous lines or peaks that you really had your eye on?
This trip was more about exploring and riding fun lines with good friends as opposed to riding sweet objectives. We definitely saw stuff that would be worth some planning and effort for a trip in the future. We got a pretty good view of Cerro Aparejo from the Yeso road. It is an absolutely beautiful peak that I would love to explore some day. 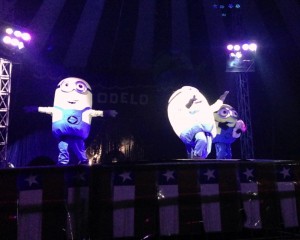 Yes, those are Minions

You can’t spend all your time snowboarding, what were some of the other highlights of the trip?
In the middle of the trip, we went down to Chillan for a day of lift accessed bluebird pow laps. We had an amazing day and on the way back into the city we saw a huge circus tent and a guy waving people into the parking lot. We were all pretty tired, but Tad put it this way, “How many times in your life are you going to get to ride pow in September and see a Chilean circus in the same day?” Good call Tad. We stuffed some beers into our pockets and paid the $4 for the mid grade seats. Inside was an experience for sure. There were about 30 attendees in a 500 person tent and maybe 6 performers that were all rotating into different roles. There was a contortionist, a silk twirler, some standup comedy and even a cameo from a random street dog that the backstage guy had to kick out. At intermission, the performers all changed into their vendor uniforms and tried to sell us spinning glow sticks and churros. After intermission, we got to see a couple more acts. The best one by far was three people in Minion costumes singing the YMCA song in Spanish. I have no idea why this was happening, but it was pretty damn hilarious.

What and when is your next trip?
As far as North America goes, I plan on riding more lines in the North Cascades this winter as well as in British Columbia. Justin Lamoureux showed us around BC a bit last season and it was really rewarding. A few local buddies are planning an Alaska trip for the spring and I am really excited for that. I would also like to go back to South America next season and work on some specific objectives. It would be amazing to travel south to Patagonia and also check out some of the riding in Argentina. Two weeks is just not long enough to squeeze all of that in.

Thank you, Frankie for taking the time to share your experiences on your trip to Chile with us. We look forward to hearing about your next adventure.

Below are a couple of additional photos from Frankies’ trip. Stay tuned to the Spark R&D blog throughout the season for more trip reports and interviews! 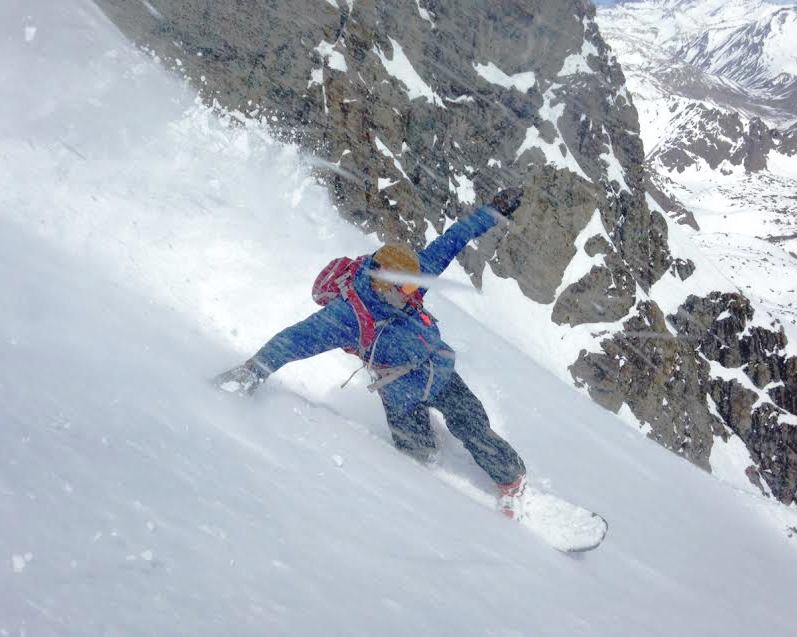 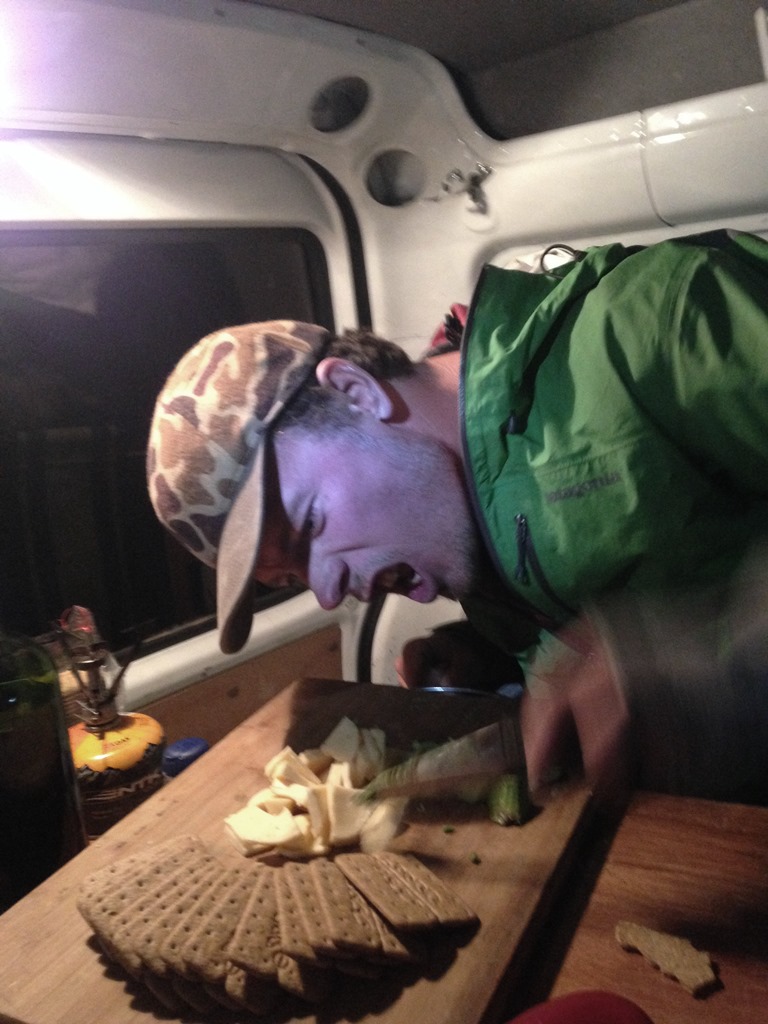