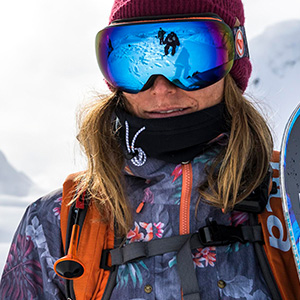 “They build the best splitboard hardgoods. Spark has kept it simple... Durability and Function. When traveling in the mountains, it is important to be able to trust your gear and I trust Spark.”

Born and raised in BC, Robin has spent the bulk of her pro career exploring the mountains of Canada and Patagonia. She splits her time filming for projects like Full Moon and Depth Perception, and guiding at Baldface Lodge. Her experience extends to over 10 years of coaching and splitboarding in Bariloche, Argentina to educating others on avalanche safety. When Robin, isn't chasing storms and riding big mountains in Canada and Alaska, she posts at her West Coast hideaway to surf in the summer.

It's not the MOST epic, but definitely the most memorable. I was on one of my last days in Patagonia and I had two days to kill with good weather, so I went for a split mission to Refugio Frey. I couldn't find anyone to go with me so I decided to go it alone, which I now know was totally stupid. I split to some lines and lapped solo all day, but decided to exit early as I got my fill and the snow was going bad. The exit was not what I thought and I took the wrong route and ended up in some sticky rock climbing situations hiking with my split board on my shoulders. I made it out just before it was too late nearly missing some slide for life scenarios. In hindsight, this was actually the best thing I could have done as I learned important lessons about ego, backcountry travel, and what NOT to do.  I did manage to ride a few life-changing lines that day...!

Going deep into the Crazy Mountains of Montana with Jeremy Jones and Mark Carter for TGR's Far Out is also right up there with my most memorable backcountry experiences. That was a wild adventure and I learned a lot!

Too many individuals to list them all here. I have always sought after and surrounded myself with knowledgeable people who push me to progress and learn. Two crews that shaped who I am are the Full Moon crew and the SASS crew.

Filming with Arcteryx on a new project!

Women who break boundaries and forge their own way despite the stereotypes. We still have so much work to do when it comes to changing the way people think about gender. Being around women who are not afraid to do what they believe in to inspire others is what I am all about!

They build the best splitboard hardgoods. Spark has kept it simple... Durability and Function. When traveling in the mountains, it is important to be able to trust your gear and I trust Spark.