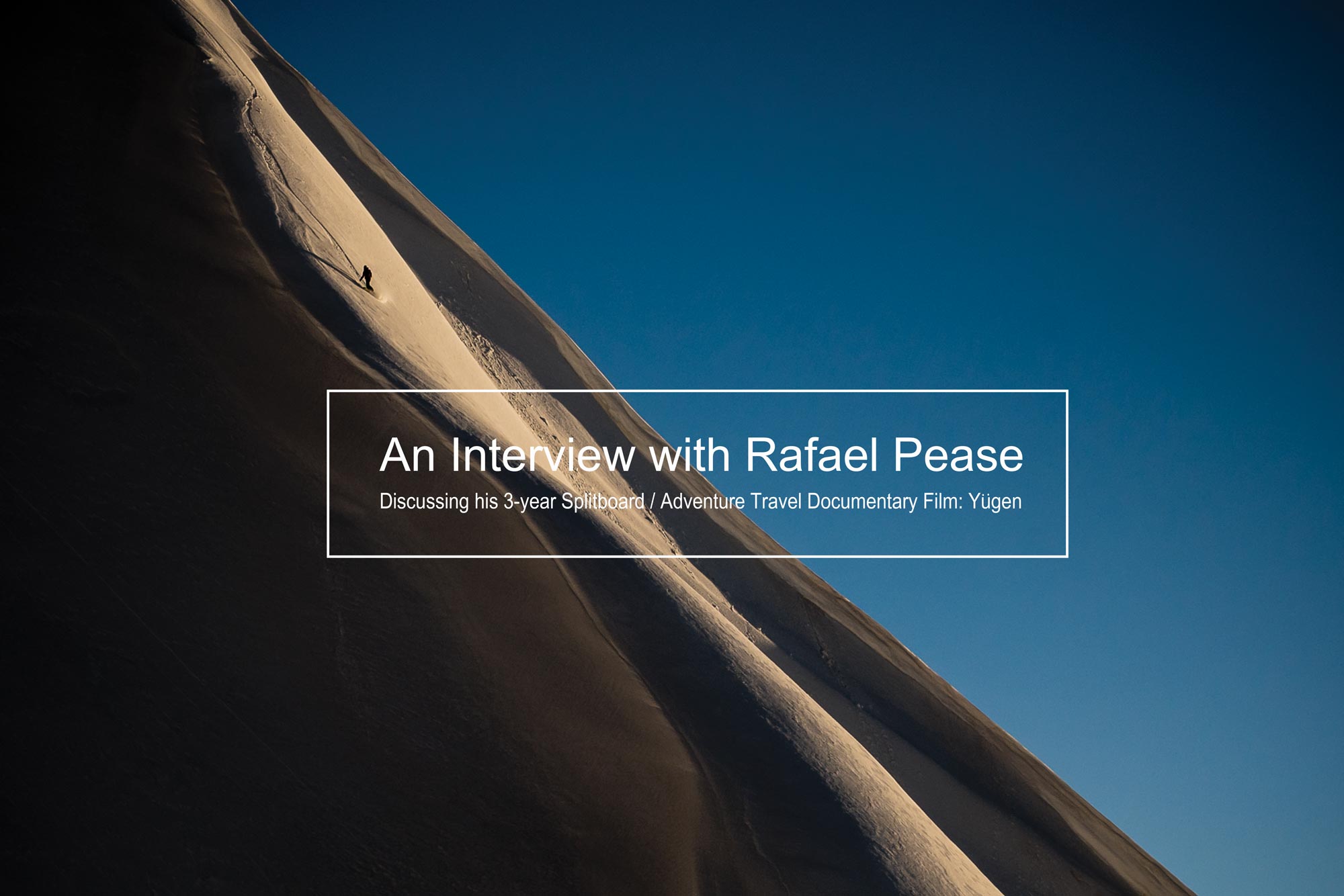 This interview can also be found in audio form on the Spark R&D Podcast. More information on the film and tour dates can be found at connectionsmovement.com.

Could you start by giving us an overview of the Yūgen project?

Yūgen has gone through a bunch of name and idea changes over the last three years. It started back in 2015 and it’s turned into a full-length feature documentary. It basically shows the connection we share in the mountains. It showcases unique cultures, conservation efforts, environmentalism, splitboarding, and backcountry mountaineering all over the world. I wouldn’t classify it as a snowboard film, I’d classify it as an adventure, suffering, and educational film.

I’ve looked at all the genres while submitting for film festivals and it doesn’t really classify within one, so I’ve been submitting it as an experimental film.

When did you begin concepting the idea for Yūgen?

I started during the end of October 2015. The original idea was to go to film in Japan in December and January, and then go to Alaska and Chile. But, I don’t know what happened. I was in school at the time as well, so it kind of got complicated. The finance was also an issue, so I added Kyrgyzstan and did Chile twice, and Canada. It kind of grew to a massive uncontrolled project for a bit.

Why did you choose the name Yūgen?

I chose the name Yūgen because it defines the sensation I have when I'm climbing mountains and snowboarding down them, as well as the feeling I get when watching the film. I hope others experience this when they watch the film as well.

Can you talk about your experience in Japan?

Japan, it’s amazing. The food is amazing, the culture. Unfortunately, we had a very tough snow year. It was a little bit below average, which still means we got a foot of snow a day. It was amazing regardless of what the locals were saying. The issue was it was very cold and we had a very bad avalanche cycle for the six weeks we were there. We were limited on big terrain options. Japan, if you haven’t ridden out there, I recommend you do it, but it’s tough. You can’t stop, you can’t turn sharply, but it’s a very fun type of snowboarding.

Filming is already difficult. Backcountry projects are even more challenging.

Filming is already super complicated. You have to keep everyone happy and conditions have to align. And if you get everything right, you still have to deal with getting the shot, which is not necessarily hard, but it’s stressful. If you mess up in the backcountry there are not always additional options for untracked lines. At least in many of the specific locations we were filming that were more objective driven. If you put one track down a mountain with a couloir, you can’t always ride it again and make it look good.

Can you talk about after Japan and how your vision changed for what this project could or should be? What challenges did you have to face then looking at it as a bigger project?

I guess the issue stems from myself not having a film background. Originally I thought that in making a documentary you have to film everything. Which is why we have over five-hundred hours of footage. It’s tough when you’re in such beautiful places – every mountain is beautiful, every sunset is amazing, and every cultural thing you see is super interesting. Looking back, I should have been a little more selective. I should have had a script. At this point, I feel like the film isn’t good enough, but it’s like any artist or creator will tell you, at some point, you have to put things to rest. Just let it be done or it’s not a project. After Japan, I saw that we needed to complement our flat light, deep pow footage with some open blue skies and big lines. I also wanted to compare the Japanese Ainyu culture with the Patagonian Mapuche culture. Then, I just got the idea to just go everywhere in the world and compare everything. We’re all the same people and I wanted to show the similarities and differences.

How did you select the locations that you ended up going to after that?

I read something online that Japan was the place to go, and everyone speaks about the spines in Alaska or the central Asian ranges. Having lived in Chile, and having grown up snowboarding here, it’s always been my home, so Chile was always part of it. I kind of picked some of the usual snowboard spots but attempted to do it a little different.

You picked some of the most iconic places in the world to film, but it was more than just riding - you were connecting with the people. Did that happen organically or did you make some of those connections before you actually landed?

Obviously, snowboarding wasn’t the only objective. We already knew we were going to go there and snowboard, splitboard, and camp. I was focused on meeting interesting people and getting to know the culture and giving them a voice, so they could speak their truth. That was challenging; you can’t plan that ahead of time no matter how much some people say you can. The language part was very difficult, especially communicating with languages we are incredibly unfamiliar with like Kyrgyz (Kyrgyzstan), Mapudungun (southern Chile), and Tahltan (northern B.C.). Then gaining the trust of the people we met along our travels was even tougher. We were showing up with cameras and people would think we were trying to take advantage of them and keep their image for your own financial benefit. But, after talking with the people and showing them that we were coming there with very humble expectations and that we were making a very grassroots documentary people began to open up a little. Once they understood that we were there to eat what they eat, walk where they walk and climb the mountains that they watch we would build great relationships with them. After the dialog was started, it was all fun and games, lots of jokes, and we shared a lot of amazing cultural experiences. Unfortunately, a lot of those things weren’t filmed because of a lot of indigenous communities wouldn’t allow filming. But, they were beautiful experiences.

I know we can’t go over all of it, but could you give me your top three experiences from the entire project?

I think my number one happy moment was coming out of the Pamir mountains in Kyrgyzstan. Coming out alive and uninjured! That was a gnarly two weeks of expedition snowboarding. We attempted Lenin peak, which is 24,000 feet I believe, in five days instead of twenty-one. The bad thing was we were there during the shed cycle so everything was falling – seracs, huge rock slides, and some of the biggest avalanches I’ve ever seen. The snow was also completely rotten, so we had a lot of obstacles. I was pretty happy to finish that and hike out of there.

How did you handle snow safety?

Some production companies and projects have a lot of support. This helps push the riding further. In Kyrgyzstan we were a couple thousand miles from the nearest clinic and probably a hundred miles from the road, so we were pretty safe on the riding aspect. For terrain management, everything is so big there, you just have to read it, feel it, and have good communication with your crew. Spring riding is interesting, it’s pretty safe but you need to choose the right time of day when it’s not too hot. This meant we’d sometimes have twenty-two hours of hiking for a two-second shot. The filming to suffering ratio was very off…

How did your body handle the acclimation?

For the first twelve days, we were hiking and riding just sixteen thousand-foot peaks. We had a couple of days left and I thought we were set physically, although we had been living off sardines, oatmeal, and butter for the last few weeks. We attempted to go for Lenin peak and we were one-fourth of the way there on our second day, which was pretty good, when we decided to call it off because everything was just falling apart. Seracs falling to our left, mud and rocks slides to our right – the mountains were just alive.

(Returning to the three experiences)

Japan, in general, is number two. Just the powder, it’s so chill. All the other stuff after Japan, the ice, the danger, just being frequently scared, that all makes me appreciate how chill Japan was. No matter what you’re riding there, the consequences weren’t as high as the other places we ended up. It might sound stupid, but I appreciated the 7-Elevens. We had very long days of filming and the late-night sushi and coffee at the 7-Elevens was not that bad!

Number three might be finishing this project! It’s been a pain in my ass, but I love it so much.

Now that the light is at the end of the tunnel, what’s next?

We have seven screenings that have been booked and signed (as of Aug. 24th) in the U.S. and in Europe. We have a bunch in South America that haven’t been added yet. We have about 15 more stops not officially on the tour yet (see below).

The plan is to go on tour from September through early winter and then once the tour is over put it in film festivals. I’m not sure about after that but I might put it online for free or Vimeo on demand or iTunes. So that hasn’t been decided yet, I don’t know how well or poorly the film is going to do, I just want to get everyone to watch it and enjoy it.

We’ve been curious here at Spark as we watched the project come along how you were going to tie it all together and make it come full circle.

(laughing)  It might never come full circle and that’s ok. It's like a four-fifths circle. It’s almost full, it's just good enough. It’s very hard to get the educational, cultural, conservation, and snowboarding altogether but I think we did. The movie is fifty-five minutes long and it’s to anyone who understands the mountains or enjoys the outdoors; they will get sucked into the movie. It’s a story of all of us; it puts you in the speaker's shoes and makes you understand the environment and each other. It’s not a negative film, it doesn’t bash people, it just enlightens you about what’s going on and who your neighbor is across the ocean.

The Andes and Patagonia Photos

Any shout outs or thank you’s?

There are too many people to thank to name them all right here. It would take too long. Besides the sponsors, beyond the ski industry, it’s the friends and family. It’s all the trust. It’s been beautiful and humbling having people believe in my work.

You know like they say, ‘It takes a community to raise a child’.

It takes a village.

If it wasn’t for the support, advice, and input of the outdoor community this would have ended probably two-years-ago.

When is the world premiere going down?

September 27th in Golden Colorado at the American Mountaineering Museum.

How do people get more information about Connections Movement films and Yugen?

Connectionsmovement.com has all the tour dates and our social channels are also a great way to keep up with what we're doing.

Check out the official trailer!