Few at Spark have a longer tenure than our Machining Manager, Ethan Marcoux. He is the epitome of the work hard, play hard mentality that is common here at our HQ in Bozeman, MT. During the winter Ethan puts as many days on snow as just about anyone in the shop. His love of the shred becomes obvious by just spending a few minutes with him. The passion he has for splitboarding shows through in his willingness to get out in a variety of conditions and is accentuated by his general prowess with a board beneath his feet. Like a good engineer, when he's on snow, he's almost always testing new or prototype equipment. His gears are always turning, pun intended.

Ethan has developed a deep knowledge of manufacturing during his time with Spark R&D. He navigates between complicated computer programs and hands-on shop work with ease throughout his work week. How did he get to where he's at, and what does a day or week look like for the E-man? Keep reading or check out the podcast to find out.

***Note, Ethan's title changed from Assistant Machine Shop Manager to Machining Manager between the recording of the podcast/interview and the publishing of the blog.

What is your job title?

My job title is Machining Manager and I'm also one of the tooling and design engineers here at Spark.

How long have you been working here at Spark R&D?

I've been at Spark for a little over six years now.

Are you the longest tenured employee besides Becca or Will?

We have one other engineer who's been here a year longer than I have.

What is your degree in?

I got a degree from Montana State University in Mechanical Engineering Technologies.

I was always, from a really young age, interested in mechanics and things like that. I used to take apart my parent's VCRs, I destroyed a couple of those as a kid. I'm sure they weren't too happy with that. At a certain point, they just started giving me broken things that I could take apart instead of having me destroy the working stuff.

You were in school when you began at Spark, correct?

Did you find that working in the machine shop helped you with school having a real-life application of what you were learning?

A little bit. I think the biggest thing it did for me was it made me realize that I did not want to be in school anymore and that I needed to finish my degree. I think working here pushed me to work a little harder and not just be a ski bum. I think that helped me finish school.

Could you give me a description or elevator speech for your job?

On a day-to-day basis, I make sure machines are running properly. I make sure the proper parts are coming off of the machines. I also manage six employees. We have three shifts - a morning shift, a night shift, and then a full graveyard shift. During peak production, we are running twenty-four hours a day. So, I have to make sure we have stuff for all six guys to do, especially for the graveyard shift because I never see those guys. I also do a lot of quality control. I make sure we have materials in stock. I don't actually do the ordering but I make sure we're not running low on important things.

Some of our machines have interesting names. Can you speak to that?

Our machines, other than our newest one, are all named after Flintstones characters. It was just kind of a funny way to do it at first. First, we had Betty, then Wilma, then Pebbles and Bamm- Bamm, and finally Dino. Just an interesting way to put a little fun in the shop. It's also a little easier when they're named like that, to know what machine people are referring to when they come to me with a problem.

You've been here for six years.  How has your role changed since then?

When I first started I was essentially assembling bindings. I came in early on, the shop was small and we didn't have a lot of employees. As we got into full production and running more machines, I worked my way into running machines. I was always excited to learn how the machines worked and how to actually program the machines. When the time came that Ryan, our single programmer, didn't have time to run all the machines, I moved my way more into my current position working my way up as the years went on. 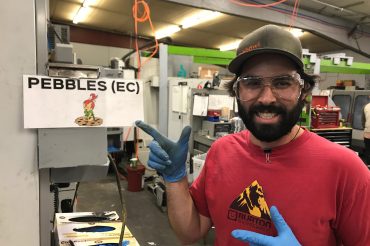 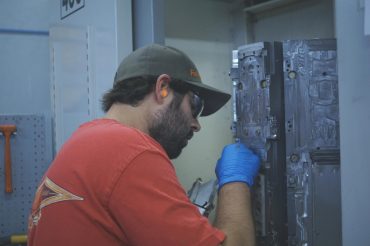 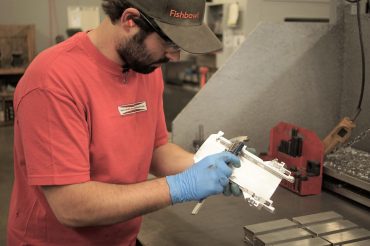 These are big, van-sized machines with a complicated computer system. When I'm out in the shop, I have no idea what you guys are doing, but it looks complicated and technical. Something you don't want to mess up.

That is true. Over the years I've definitely made mistakes; I've crashed the machines a couple of times. I think that is a big part of learning to be a CNC operator and programmer. There's always going to be some problems, but in the beginning, you just run things a little slower. When we have new guys come in, I can see they are working slower than I am, but it's exciting to see them grow and learn.

For a quick reference - what bindings were we building when you started?

When I first started the only binding we had was the Blaze. It was quite a bit different than the Blaze we have today.

What are the main differences?

The biggest difference at this point is the plate itself which was quite a bit larger. It had more threaded holes in it for mounting the heel loop than our current baseplates do. It also had an aluminum bracket that helped hold the toe straps in place which we got rid of a few years ago.

You've seen a lot of evolution in the products.

I have. It's kind of mind-blowing to see where we've come from to where we are now. Not only in the product, but in the company and our shop space.

What is your favorite part about engineering and working out in the shop?

Overall, my favorite part is getting to work with my hands. That being said, I also love seeing the products go from the prototype stages over the course of the year to actually seeing people ride something I had a big part in creating.

You've had one project in particular over the last year that has taken up a lot of your time and energy. Can you speak about that a little?

This past year the biggest project I've been working on is our new Crossbar Clip that is coming out this fall. It's been a long trip. Seeing the progression every couple of weeks is rewarding. I'll make a few sets and hand them out to employees and Will to test. We'll all ride them, then come back and talk. Every week there are subtle changes and by the time production season rolls around we have something to release to the public that we all feel confident in. That's a big part of why I became an engineer; I wanted to make something that people enjoy, that I also enjoy. I was very fortunate to keep working here after I graduated from MSU. I think my passion for splitboarding and snowboarding, in general, correlates a lot to my work. I don't think I'd be as excited if I were making a random widget.

Can you talk a little bit more about the Crossbar Clip?

We played around with a lot of different ideas. The biggest things we wanted were to have something that helped to pull the two halves of the snowboard together. So, it has a cam locking lever that will help pinch the board halves together. It also has a 3-inch cross section that runs across the seam which adds torsional strength. The ultimate goal was to make your splitboard ride more like a solid board. 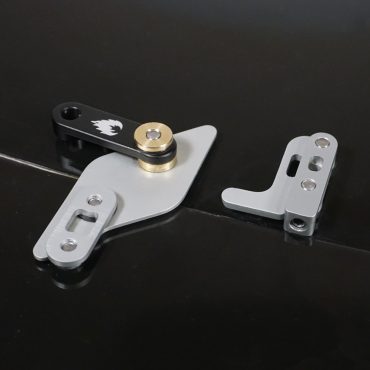 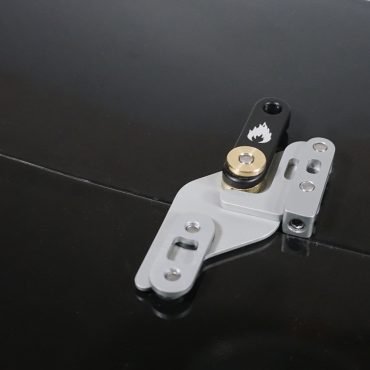 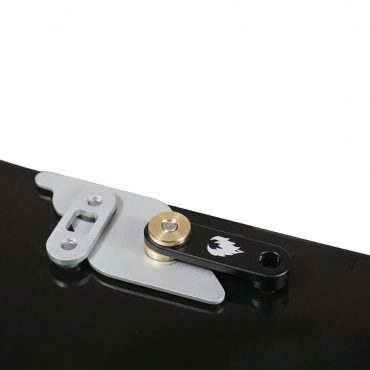 To get the rest of this interview, check out the Spark R&D Podcast.