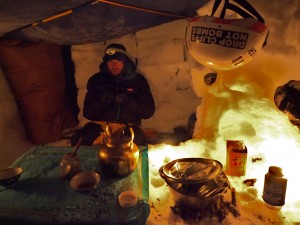 British splitboarder Mike Handford and a group of freeride skiers from New Zealand and Australia are currently traveling through Kyrgyzstan riding and skiing the remote mountains that blanket the country. With little information about this former Soviet country, they set out aiming to explore as much of the terrain as possible, while educating local guides in avalanche awareness.

“The terrain, while perfect for freeriding, makes life difficult in this part of the world,” Mike wrote from Kyrgyzstan.  “Lacking the oil or infrastructure of its neighbors, and a huge portion of its landmass buried under permanent ice, there are few sources of income for the traditionally nomadic people.  A painful succession from the Soviet Union and two further revolutions further weakened the economy, the third poorest in Central Asia. While the country is home to a handful of ski resorts, relics of Soviet control prior to 1991, even greater opportunity for tourism lies in Kyrgyzstan’s endless backcountry. Mountain roads and alpine villages provide spectacular and easy access into freeride terrain that ranks among the best on earth. While a huge amount of effort has been put into training local guides for summer hiking, lack of training and avalanche awareness leaves many afraid to venture into the mountains in the winter.”

We first started discussing the possibility of a backcountry trip into Kyrgyzstan as the 2013 winter season in New Zealand drew to a close. Twenty-four hours and some hasty Googling later, we had agreed the trip was on.  Fast forward six months and we were arriving in Kyrgyzstan’s capital, Bishkek, with little to no idea of what to really expect — but an awful lot of enthusiasm to make up for it!

We spent the first week in Karakol, which had been marketed to us as Kyrgyzstan’s “Outdoor Adventure Capital.”  Unfortunately, after a little exploration, the snow down low was rotten and the ridge lines up high wind scoured, which was a bit disheartening.  It was, however, a great place to spend some time and come to grips with what we had to expect in the coming two months.  We were all very surprised at how much technology has engulfed the culture in the past couple of years.  Everyone has a mobile phone that seems to ring 20 times an hour (although we still have no idea what they possibly have to talk about) and WIFI was easily accessible.  If you pick up a guide book, however, be wary of when it was written:  Kyrgyzstan is a rapidly changing culture right now and it would be very easy to find yourself caught out. 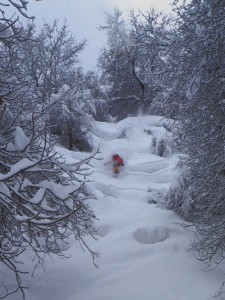 Luckily we heard through the grapevine that Arslanbob, a small traditional, mainly Uzbek-populated town in the south west — a mere 18 hour drive away — was having a record snow year.  That was our signal to pack up and head that way. As we wound our way through the many mountain passes on the Bishkek-to-Osh road, the climate and snow level were ever changing, and when we eventually arrived in Arslanbob, it was a winter wonderland.  It was one of the most scenic drives we have ever done!  Topping out at 3586 meters, the Too Ashuu pass is certainly spectacular — if you can find time to enjoy it between one of the near death experiences with the speeding taxi drivers and the negligible road laws.

Hayat, the head of Arslanbob’s community-based tourism, greeted us on arrival and set us up with a host family for our stay. The community-based tourism system all over Kyrgyzstan is great and a really effective way to both immerse yourself in the local culture and help out the local families with some passing winter trade. Arslanbob is situated in a valley, surrounded by 4000 meter peaks and the largest walnut forest on earth, which gives great possibilities for both high alpine mountaineering and stormy day tree skiing. 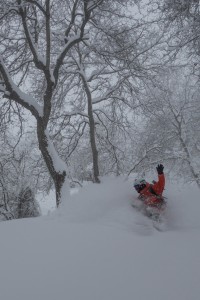 Our first trip was to a zone called Jaz Jarum.  We left first thing in the morning and toured four hours into base camp. On arrival, the options were overwhelming!  We decided to have a look at the snowpack and ride a single line before dinner.  After a quick skin up, we were standing atop our line with a combination of both excitement, and a little apprehension.  Alex dropped first and after a huge woomph, the whole face started to slide.  After 200 meters of tumbling over rocks with both skis off and both poles gone, we were relieved to see him giving the OK from the bottom.  He had somehow managed to claw his way out of the main path of the slide and over the ridge into something a little smaller that had only buried him waist deep.  We returned to camp, where the atmosphere was somber.  We needed to decompress and reassess our options.

We woke the following morning to another amazing bluebird day and, after talking things over the previous night, we decided to ski some really mellow terrain and get a more concise understanding of the snow pack before we went back to any steep faces. 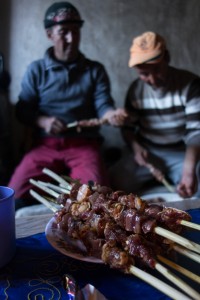 On our return, we were greeted by the arrival of a few more of the crew.  Blake, Chris and Jock had all just arrived from Bishkek and brought in a great boost of energy after the previous few days happenings.  We immediately started planning to head out for five days, staying at the base of a peak to the west of town called Nooruz.  After talking to Hayat, we were informed we could stay at a shepherd’s hut close by, complete with a wood burning stove, insulation and, as we later found out, mice that steal your eggs. This was great news and it turned out to be an amazing place to eat, rest, and dry out our gear.

We managed a summit on our second day in camp, topping out at 2876 meters. We woke at 4am one morning to catch the sunrise from a nearby ridge and rode some amazing lines. Definitely a zone we would recommend and, to top it off, the snowpack was becoming more stable, which gave us confidence in what we were riding.  Hayat and his CBT guides came and joined us for the last evening, cooking us amazing food and sharing stories. The following morning we arranged to take all the guides out for some avalanche education.  We spent the day talking them through digging a pit, identifying snow layers, testing the snowpack along with terrain and approach selection. This was something we had talked about doing while organizing the trip and it was great to pass on knowledge that will keep the guides and their clients safer. It was a great way to end the trip into Nooruz. 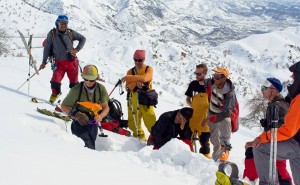 On our return, we heard that the 21st of March was New Year’s Eve on the Persian calendar.  This coincided with Chris heading back to Australia, so we decided to head back towards Bishkek.  In the three weeks we had been away in Arslanbob the city had completely changed. All the snow had melted and the atmosphere was much more vibrant. We spent the day around the Ala Too Square, which although the centre of many political clashes had been transformed into a huge street party filled with music, entertainment and a lot of balloons. The crowning glory of our day was definitely starting a street party with a group of kids from a local dance group. Growing a crowd of ten to hundreds within minutes will certainly live long in my memory.

As I sit writing this, we are currently preparing to leave for the last two weeks of our trip. First on to Bokonbaev where Hayat has arranged for us to meet up with the CBT there and then on to Narin before finishing up in the high alpine of the Ala Bel Pass.

Keep up to date with our travels on Instagram: @renegades_ob