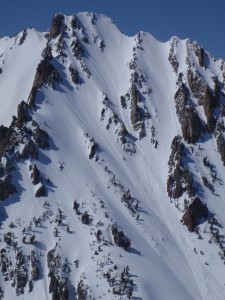 For splitboarders venturing into the backcountry, information can be the difference between an epic day and tragedy. In an effort to increase education and avalanche awareness, Spark R&D is presenting a 7-part web series called Avalanche Problems, which will explain the nationally standardized types of slides most commonly described in advisories by avalanche forecasters.

Understanding the characteristics of each type will help to determine where avalanches are likely to occur and what kind of terrain should be avoided. In today’s installment, we will cover Loose Dry Avalanches.

Loose dry avalanches in a nutshell

Soft and unconsolidated surface snow means there’s potential for loose snow avalanches, otherwise known as “sluffs”. Although outrunning monster sluffs in Alaska looks doable in the movies, the reality is that not everyone has the ability and experience, nor is it the right tactic for every situation.

What exactly is a loose dry avalanche?

• Often called “sluff” slides, this is when an upper layer of cohesion-less snow starts as a small, localized slide, gains momentum, and amasses more snow as it travels down slope.
• Natural releases often have a fan like shape, originating from a single point, and gain more width as they travel down slope (also known as a point release).
• These slides tend to be on the smaller side and are less dangerous than slab avalanches. But on large, steep slopes, like in Alaska, sluffs can become quite large and lethal.
• If there is a secondary slab problem, a sluff slide could be enough weight to trigger it.
• In the event that the storm snow is forming a slab, this would be referred to as “storm slab.”
• Loose dry conditions tend to be short lived if formed by new snow (hours to days), but can stick around for longer in periods of light wind and consistent, cool temperatures.

Where you might find loose dry conditions, and how to avoid it

• Avoid steep slopes! This problem can be entirely managed by staying off of steep terrain until the new snow has settled.
• For big mountain riders, consider the consequences of being caught and what you could be pushed over (cliff bands, rocks, etc.). Avoid slopes that have these features.
• Also consider potential terrain traps, as even a small loose avalanche can pile up deep in the deposition zone.
• Plan your decent wisely, and think about areas out of the fall line to escape a sluff.
• Although an advanced technique, ski cuts can work well, as you can push off the top layer of snow and let it run out front, which may mitigate the problem.

How to look and test for loose dry conditions

• Observations about natural avalanche activity and recent weather are all useful. 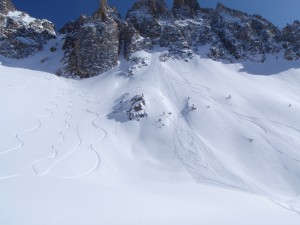 • Fan shaped natural releases on steep slopes during or after a storm event are good indicators that a skier could trigger these slides.
• Recent new snow and loose surface conditions (from new or faceting) are signs that are easily observed, and don’t require a formal pit.
• Ski cutting short test slopes can tell us if the surface is wanting to run or not.

Tips: Although new snow is likely the cause of sluffs, long periods of cold and clear weather can facet the surface and create loose snow conditions as well.