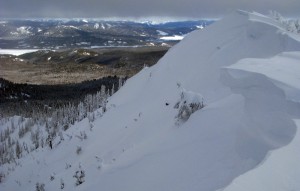 For splitboarders venturing into the backcountry, information can be the difference between an epic day and tragedy. In an effort to increase education and avalanche awareness, Spark R&D is presenting a 7-part web series called Avalanche Problems, which will explain the nationally standardized types of slides most commonly described in advisories by avalanche forecasters.

Understanding the characteristics of each type will help to determine where avalanches are likely to occur and what kind of terrain should be avoided. In today’s installment, we will cover Wind Slab Avalanches.

Wind slabs in a nutshell

These slabs are very common throughout the winter in just about every mountain range. They’re created by wind deposited snow and tend to live under cornices, below ridgelines, around the edges of gullies, and in most alpine terrain. After a wind event, your best bet is to avoid these types of terrain features and let them stabilize, which can take from a couple days to a week.

What exactly is a wind slab?
We often hear people speak of wind loading and wind slabs, so let’s talk about what exactly this is and how are they formed.

• When the wind blows snow across, or up the mountain, it gets deposited onto adjacent slopes, forming a slab (a cohesive unit or “chunk” of snow).
• As the snow grains are blown, they get broken into small particles. When these small grains come to rest, they pack tight together and form a nice slab of snow.
• The slope that the wind is blowing across and stripping snow from is called the windward slope. The side that the snow lands on, and is becoming loaded, is referred to as the leeward slope.
• The thickness can depend on the strength and duration of the wind, but also the amount of snow available for transport.

Where you might find a wind slab and how to avoid one:

• Typical areas include off ridgelines, below cornices (pointing towards the slab), around

gullies or ribs, and in any exposed alpine terrain.
• Most wind loading occurs in the alpine, at treeline, and in avalanche start zones (the tops of defined avalanche paths). During especially strong wind events, loading can be experienced mid slope and below treeline.
• Avoid leeward slopes and commonly wind loaded terrain features (mentioned above) during and post wind event.
• When venturing on slopes that do not appear to be wind loaded, keep in mind that loading can occur in pockets. Watch out for a change in surface texture.

How to look for and test a wind slab: 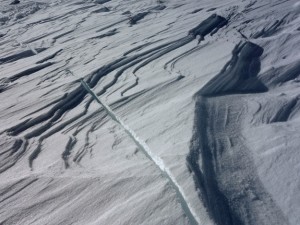 • Visually inspect slopes: Look for pillow-like features; feel for drum-like or hollow sounds; watch for shooting cracks; and assess if a slab exists on lower angle terrain.
• Look for loading patterns. Stripped snow on one slope means it landed somewhere else. Local wind patterns often provide visual clues.
• Pay attention to what direction the wind has been blowing by reading the avalanche forecast, and keeping up to date on the weather forecast.
• Wind slabs are typically in the upper surface of the snowpack, so tests to determine bonding and sensitivity can be done quickly.

Tips: Wind can rapidly change conditions and load snow up to 10 times faster than it can fall from the sky. If the wind is really blowing, the avalanche danger can go from mild to wild very quickly.