A Carbon Neutral Detour in BC – Tamo Campos 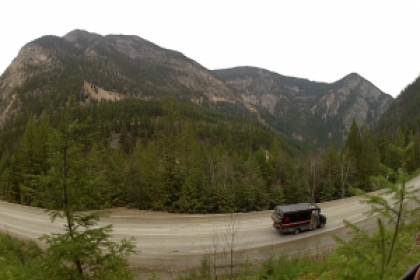 Our trip has taken quite the detour. We decided to come back through Vancouver instead of taking the ferry to Prince Rupert. The decision was mostly to save our diminished funds and secondly because one of the kids in Alert Bay brought up the point that driving on veggie oil is more sustainable than taking diesel ferries. We agree. So, on the road we go. 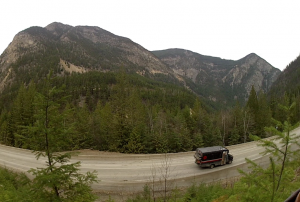 On the road again.

The detour ended up being a blessing in disguise. On our road up to Squamish we met Dylan. He’s a ripper and runs his Toyota Landcruiser on veggie oil. Not only that he uses a system (made completely from thrift shop purchases) that gives him 20% better mileage. The magic consists of two salad prongs, electrical wire, baking soda and a thermos. He uses the excess electricity from the alternator to flow into the salad prongs, which sit in backing soda and water. The reaction creates hydrogen and oxygen (out of water), and then sends it into the air intake. He told us combustible engines only get 30% of the energy within the fuel that is burnt. The rest goes out your tail pipe!! Insane no. We’ve been looking up these systems and it looks really easy. (Soon as we find a good thrift shop Boris the bus will be getting some better millage!) 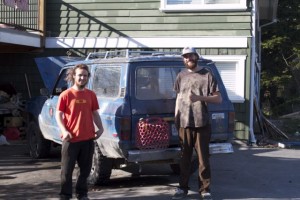 John approving of the system!

From Squamish, we cruised the Duffy lake into Quesnel. Just outside of Lilloet, we ran into our friend Sam driving the other direction..  He’s a 23 year old surfer that we met in Tofino some years back. He’s been living in Prince Rupert the past couple years with his daughter Hannah. 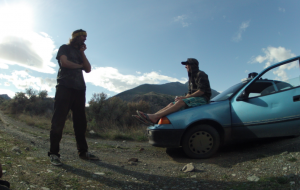 John taking about 30 seconds to convince Sam to turn the other way and join us on the trip.

Sam’s been working in Grande Prairie the last couple months on a fracking rig! He originally got into the industry because of the money while not knowing much about it. Listening to his insight in the industry is heavy.

His stories of how ruthless the oil and gas industries are incredible. They’ve hit me hard and I’m beginning to realize how important it is to regulate this industry. I’ve had trouble sleeping after hearing stories of entire lakes and rivers being sucked dry in Northern BC and Alberta. One story struck especially hard. He told us how in every camp he’s worked at every single tap says “DO NOT DRINK WATER!”  He told us how everyone on the lease is forced to drink bottled water. This is the same industry that advertises as being cleaner burning and not affecting ground water.

That is simply not the case. It’s time we start doing what other countries are doing and ban Fracking until more studies can be done on the consequences on water. (Quebec has already put a moratorium in place)

After loading up grease from DQ, Mike’s Lounge and a Japanesse restaurant, we’ve finally made it Smithers. Everyone in the town is so progressive. Even the local snowboard shop has solar panels to get them off the grid. We chatted with the owner for a while and he explained that business owners would love to go green but they need help from consumers. “You buy sustainable products, we bring in more sustainable products.” 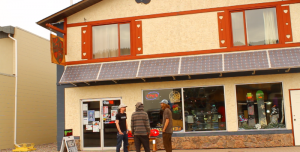 After checking out the shop, we set up a presentation at Smithers Secondary School. We didn’t have a clue how many kids would be there. It’s a school of over 800 and definitely had us nervous before chatting.  We presented on the risks of Fracking, pipelines and plastics while bringing up solutions we can all take part in. 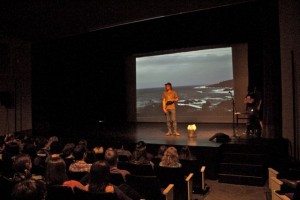 Jasper and a jug of veggie grease presenting.

The presentations went amazing! Kids were stoked and we later received an email from a teacher saying that their kids we’re pumped. It’s great to hear and at the same time we’re equally as moved by the work the kids are doing. Next week the kids have plans to get together to write letters to Stephen Harper about Northern Gateway!

We were pumped to finally make it to John’s Driftwood off the grid farm. We found it online before coming to town and the farm did not disappoint. The farm is off the grid through a combination of biomass, solar panels and waste veggie oil. As we rolled into the farm, we passed goats, chickens and Icelandic horses. Side by side with solar panels that is! 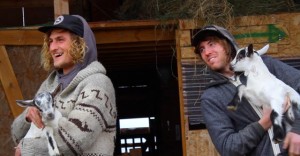 Sam and Jazzy enjoying the farm.

As John gave us the tour he took us inside to see his pride and joy, a biomass generator that creates biogas and heats the water lines with the exhaust. This is done if by composting wood chips!

As the afternoon rolled on, we were invited inside to eat renewable energy created Bretzels and goats milk. Our time at the farm was great. It’s easy to get drowned out in the downfall of our biggest energy companies (oil and gas) but what we realized at the farm is how exciting it is to be on the cutting edge of changing the way we see energy. It’s empowering to know what we can accomplish with forethought, planning and research. John, originally from Germany, moved to Smithers when his bus broke down in the area and he fell in love with the land. He told us about Canada’s energy policies in comparison to Europe or Scandinavia. Our model is one where business’s that do not profit within the first years are inefficient. Unlike Scandinavia where businesses are run based on 5 and 10 year profit margins. You can imagine the short cuts a business is willing to take when they need to make profits within the year. 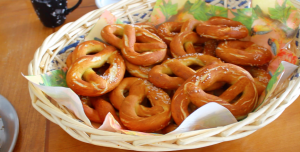 Bretzls made with renewable energy.

Cruising out of the farm we finally caught a storm. We spend an entire day up the backcountry around Smithers! Split-boarding up and shredding down, with sustainable pretzels in the pocked of course.

Was great to get back on the split boards. It’s such a beautiful experience climbing mountains on your own two feet. It gives you time to appreciate your surroundings. Most importantly it reminds us, with its beauty, why the natural world is worth fighting for. 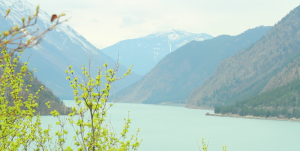 What you can do after reading this.

1. Write a letter. Letters can have huge impacts!

We recently wrote letters about Site C from our bus while stealing Wifi in Vanderhoof. We can all do it so let’s let our elected officials know how we feel about Canada’s energy policies.

3. Take five minutes of your day to goggle Kristianstad. It’s a modern city in Sweden that is on target to be fossil fuel free. It’s rad and gives us hope that there is another path we can take.

Till the next time, 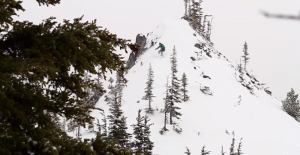 Jazzy ripping down a line.

www.beyondboarding.org
Words of advice? got something to tell us?
Our mailing address is:
beyondboarding@gmail.com